Look up any ukulele chord and learn how to play it in multiple positions and variations across the fretboard. Tap "Select Chord" below to get instructions.

Did you know you can play the same chord different ways across the ukulele fretboard?

You can see that the classic C major chord above has 14 different variations!

Some variations are easier to play; others create a more interesting sound.

No, you don’t have to learn all those variations right away. For any chord you select, the main variation is shown first. Learn that one first and then explore the others!

Use this tool to reference any ukulele chord you come across in a song, or use this to find different ways to play the same chord to add variety to your playing.

Still though, you might have some questions, so pick a topic to jump to the answer.

Note: Click any of the links to skip to that section.

How Do I Read Ukulele Chord Diagrams?

A chord diagram is designed to look like a ukulele fretboard, as if the ukulele was positioned in a vertical, upright position. 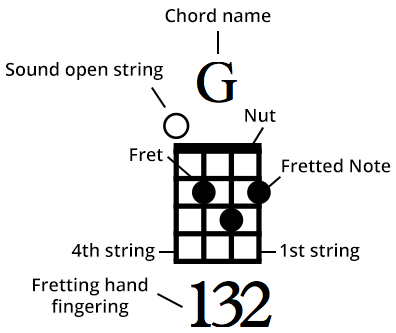 The top thick black bar represents the nut of the ukulele.

From left to right, the four vertical lines represent the strings of the ukulele (g-C-E-A). The 4th string is the top g-string, 3rd string the C-string, 2nd string the E-string, and 1st string the bottom A-string.

The thinner horizontal black lines indicate the frets of the ukulele.

The black filled-in circles represent the spot where you position a finger to play a chord. The open, empty circles indicate strings in the chord that ring completely open.

For example, select a “C major” chord. The chord diagram indicates you place your ring finger (number 3) on the 3rd fret of the A-string. The other strings ring open.

What Are The Most Important Beginner Ukulele Chords To Know?

Every beginner needs to know these 10 ukulele chords:

These are the most common ukulele chords you will encounter in your journey!

For a full breakdown of each of these chords and how to play them, watch this video lesson I made.

Learn these and you’ll be ready to play hundreds of songs!

Why Are There So Many Chord Variations?

Surprisingly, there are multiple ways to play the same chord across the ukulele fretboard.

How does this work?

The short answer is…

A chord is made up of a selection of 3-4 notes (most of the time!) and these notes can be arranged in different orders, known as inversions, and in different octaves up and down the neck.

Not to mention, some chord variations are easier to play than others!

If you’re new to ukulele, just learn the first variation presented in the chord library, as that will be the most commonly used position.

What Do The Different Chord Qualities (Types) Mean?

You might have noticed there are different chord qualities you can select.

Here’s what each of them mean:

If you have more questions about chord qualities or don’t see one listed, send me a message.

How Can I Make a Chord Easier to Play?

There are four main ways to make a chord easier to play.

Remember the numbers below the chord diagrams indicating which fretting hand finger to use are only suggested fingerings.

For example, I like to sometimes play the infamous D7 barre chord using my middle finger to barre the strings versus the index finger. Or, one of the worst ukulele chords in existence – the E major chord – there are different fingers you can use to play the chord.

Try experimenting with different fingerings to play a chord.

2. Search for an easier variation

The second way to make a chord easier to play is to look up an alternative variation.

For example, I find Dmin7 Variation #2 a lot easier to play than Variation #1 because I have large fingers that don’t always like to fit closely together.

Not every variation will be easier to play but sometimes it is!

Some chords like Bb can be really difficult to learn.

To make it easier, some of my students, especially those with arthritis, will fret the notes falling on the top three strings and mute the note that falls on the bottom string.

You can get a full rundown on this Bb chord trick here.

Ugh, practice! I know, I know… but the good news is the more you work on a chord, the easier it gets, so keep putting in the time and you will see improvement!

Here’s how I like to practice ukulele if you just have 15 minutes in your day.

How Do I Stop My Chords From Buzzing?

If your chords buzz or sound bad when you play, then the trick is to fret the strings as close behind the fret as possible!

Why Do My Chords Sound Out of Tune When I Play?

Firstly, if your ukulele chords sound out of tune when you strum, then, check your tuning.

It might sound obvious, but it’s not uncommon to need to tune every 15 minutes of playing, depending on the quality of your ukulele.

If your chromatic tuner is reading in tune but the chords sound out of tune when you play, then, that could be an intonation problem, where the act of fretting a note pulls it out of tune. This could be because you’re pressing too hard and bending the string, but it could also be because of poor ukulele quality.

Sometimes a guitar luthier at a local music shop can perform a “set up” on your uke to improve the intonation.

It’s hard to say exactly so be sure to check out my article on the 6 Reasons Your Ukulele Is Going Out of Tune.

How Do I Change Between Chords Faster?

The short answer is you need to set up your chord changes with what I like to call the Hover Technique.

This is the act of planning your chord changes in advance and finding alternative fretting hand finger positions to make chord changes easier.

I cover this topic in full depth in my online beginner ukulele course Strumming Tricks.

Please send me a message. I am constantly updating the chord library and would love to tell you how to play that chord on your ukulele and add it to the library.

Having a tough time smoothly changing chords? Get the free book.

Get the secrets to making smooth chord changes on ukulele without hesitating or pausing with the free book Make Smooth, Seamless Chord Changes In 5 Minutes Or Less. You learn:

Enter your details and I'll send you the free book: