Did you know there are often several different ways to play the same ukulele chord?

In fact, you can search for many of these ukulele chord variations in the Ukulele Tricks Chord Library.

A perfect example of this is the easy-to-play Hawaiian D7 ukulele chord versus the more difficult standard D7 barre chord. 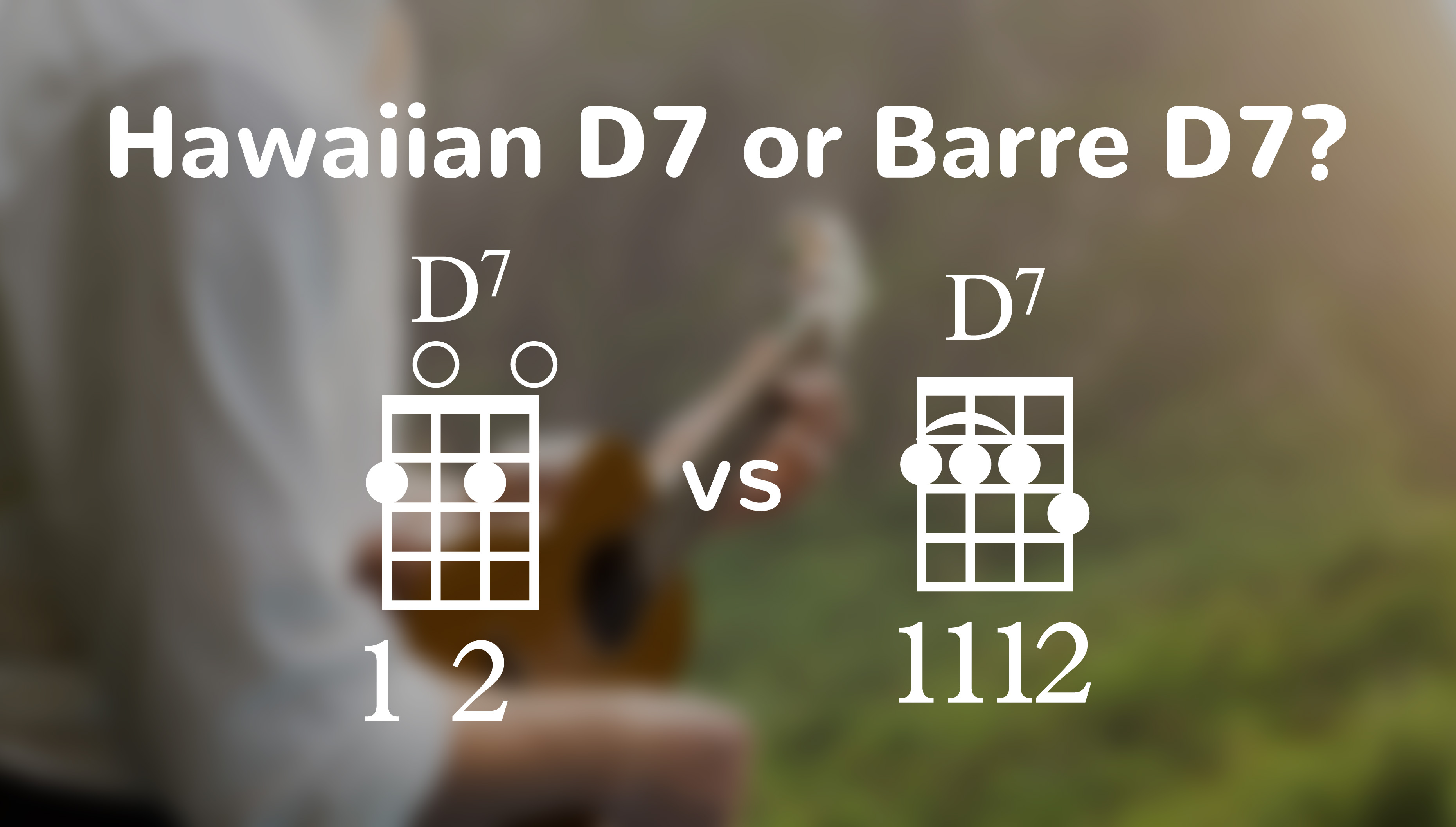 When you play a different variation of a ukulele chord, like the D7 chord above, it’s still the same chord because it has the same notes contained in the chord; but those notes are often rearranged in a different order or in a different octave.

Some variations are easier to play than others.

And some variations create a different timbre or texture to the chord (bright vs. mellow).

But some variations are more preferable than others in certain circumstances.

In this lesson, let’s compare the Hawaiian D7 ukulele chord and the D7 barre chord and figure out which one is the best to use.

How to Play the Easy Hawaiian D7 Ukulele Chord

As many new ukulele players find, this is the easiest way to play a D7 chord on ukulele.

From the top g-string to the bottom A-string, this chord has the following notes which are found in a D7 chord (D-F#-A-C):

Keep those notes in mind because you’ll use this knowledge to compare with the standard D7 barre chord.

How to Play the Standard D7 Barre Ukulele Chord

To play the standard D7 barre ukulele chord, take the index finger and barre or press down on all four strings at the 2nd fret. Place the middle finger on the 3rd fret of the bottom A-string.

This version of D7 is harder to play but is well worth the practice (you’ll see why in a minute).

From the top g-string to the bottom A-string, this chord has the following notes which are found in a D7 chord (D-F#-A-C):

Now, let’s compare these two chords and figure out which one is better to use.

You’re playing a song and you come across a D7 chord.

Which chord variation do you play?

I always recommend to beginner students in the Strumming Tricks online lesson course to stick with the standard D7 barre ukulele chord. Yes, even though it’s harder to play.

If you remember, the easier-to-play Hawaiian D7 chord has the following notes in the chord:

What do you notice about that arrangement of notes?

Because the Hawaiian D7 chord is missing the root note of the chord and because the seventh note is the lowest note in the chord, this variation is not always suitable for most songs.

The easier-to-play Hawaiian D7 chord variation is best used in songs played in the key of C major.

This is because of that low open C-string note that rings out through the chord. In songs where the key is in C, meaning the root note or “home base” is a C note, this Hawaiian D7 variation has a pleasing sound and works great.

This is why I always recommend beginners to go the extra mile and learn how to play that standard D7 barre chord.

Yes, it’s more challenging to learn and to play, but you can be sure whenever you come across a D7 chord in a song that it will always work and sound amazing.

If you struggle with barre chords like D7, you definitely want to watch this video lesson about playing the Bb barre chord on ukulele.

One Last Note About the Hawaiian D7 Chord

If you’re more advanced and familiar with music theory, you might be tracking along and thinking:

“Wait a minute! The Hawaiian D7 chord is actually an F# diminished chord!”

This position contains the notes F#-A-C which are the three notes in an F# diminished triad.

This is yet another reason why the standard D7 barre chord should be your chord of choice for the majority of songs you play.